Haier portable washer for sailboat use

Never could get my boat off the hard, it's still there, mast and all. But.. well, crap, that sucks. 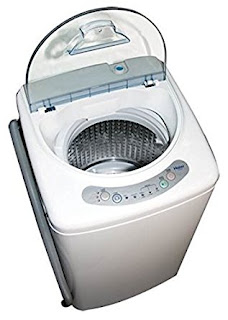 I came across the details of a test I had made several years ago and figured I might as well post it here for anyone contemplating doing the same..

I didn't shop around specifically for a washer for the boat, I had bought this washer several years prior for my apartment and have been very happy with it, and it occured to me that I could use it on the boat. I think the specifications says water consumption is like 5 gallons, but I really have no idea, I should have tested that.. maybe that means per cycle.. I don't know about using salt water, my intention is to draw fresh from the tank

For what it's worth..
Ran a real world power consumption test on my (at he time approx.) 3 year old Haier HLP21N Pulsator 1-Cubic-Foot Portable Washer to determine the plausibility of using it on my sailboat without shore power..
The measurements I made indicated it would just fit into the hanging locker of my G26, but I never actually tried to get it in there, but the results of the test are still valid.

For the power source I used a fully charged Goal Zero Yeti 1250 generator. 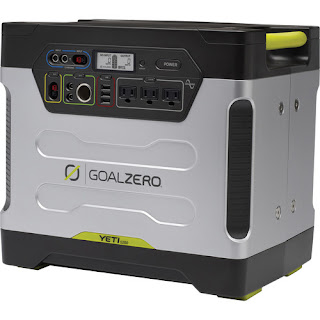 I plugged the washer into a 25ft extension cord, with the other end plugged into the Goal Zero (I used the extension cord only because I didn't want to bother with moving the washer and the Yeti closer together for this impromptu test).

Set the washer on the normal wash cycle and with the water level set to high.

As the washer fills with water it used zero watts because it's a passive fill using the sink faucet connection.

I put in two jeans, one lightweight pants, three shirts, a few pairs of socks and underwear, and a baseball cap.

During the drain cycles it uses 33watts.

The spin cycles (there are several spin cycles) all briefly initiates at about 480watts, and then instantly drops to about 190watts thereafter.

When the wash was done (about a half hour total runtime), the Goal Zero indicated it was at approximately 80% charged. So, although it used 20% of my stored power in just 30 minutes, it appears it would of been perfectly feasible to use this washer on my boat.

And yes.. a bucket uses zero watts, but damn.. I've had to wash clothes in the sink or bathtub before, and it's a time consuming tedious task, manually agitating it for a while, wringing each item out, then rinse all the soap out, then wringing each individual item again. I so much prefer just dropping the clothes in, pushing a button and hanging the damp clothes to dry.

However, it should also be noted that the washer should be sitting level during operation, so obviously the time to do laundry would be while at anchor on calm waters!
Gimballing may sounds like a good idea, but that also means it would have to be raised higher, thus using more space of the upper part of my hanging locker, thus no room to hang shirts or whatever...

I think the main reason it would have to be level is during the spin cycles.. I have a tendency of overloading, so sometimes it starts to spin, then stops and beeps.. at which point I have to manually resituate and balance the weight of the clothes evenly, then when I close the lid again the spin works proper..

I guess you could use salt water to wash.. that never was my intention though, at home it's made to hook to the kitchen sink and it automatically senses how high to fill, but you can also simply pour water into it with a bucket, the built in sensor still knows when to start washing.
It has a pump that drains it automatically.

Shop around I still see then turn up for under $200 sometimes.
In conclusion, if ever I move aboard a boat, the washer is coming with me. The Yeti can handle this washer off grid just fine.
Posted by end80 at 6:15:00 PM No comments:

Ok, I obviously have other concerns and haven't posted much lately (my boat is still stranded far on the hard). But I'm going to throw something up which you may find of interest.. 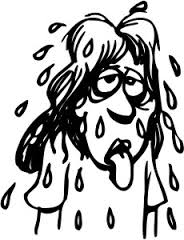 cool, with the hatch cracked open the breeze tends to blow in an ricochete off the ledge above the door back into the vberth.. but as soon as you enter the head/hanging locker "hallway", it's a lot hotter, and the main cabin is sweaty hot. So I bought a Camaro fan for about $40 for the main cabin.. which helped, but only if it was blowing directly on you.. So then I bought a second one and hung them both in the main cabin.
It was an improvement.

Well, a few weeks later I made an impulse buy on a different fan I saw on ebay. It was a 12v portable ceiling fan from.. China?, Japan?.. or was it Hong Kong?.. I'm not certain, but it was only $11 with free shipping, so I figure what have I got to lose?  So I bought one. There was really only one place it could go, and that was to hang over the dinette table on my Grampian 26..
I tell you what.. it performed better than the two Camaro fans I had in the same area.

I wish I took some pictures, but I didn't.
To test it out I just ran a piece of wire across above the table (from the bulkhead and across to an existing lamp attached to the aft wall), with the fans hanger secured at center point, then I simply attached the fans alligator clips directly to my battery, and the fan began to rapidly spin (it only has one speed). It is whisper quiet, uses about 5watts, and no worries if you should happen to hit your head or hand in the blades because it can't hurt you at all, it just stops the blades.
Best of all.. it really puts out some air!!
Later I plan to fabricate a narrow shelf across and just above the window for charts and what not, and then attach the fan to the underside of that shelf.
With only the mini ceiling fan blowing it made a very noticeable difference of making the cabin comfortable on a hot day. You can really feel it's breeze especially while sitting at the table, but it also circulates the air very well in the entire area. And, it makes less noise then the overpriced little Camaro's. 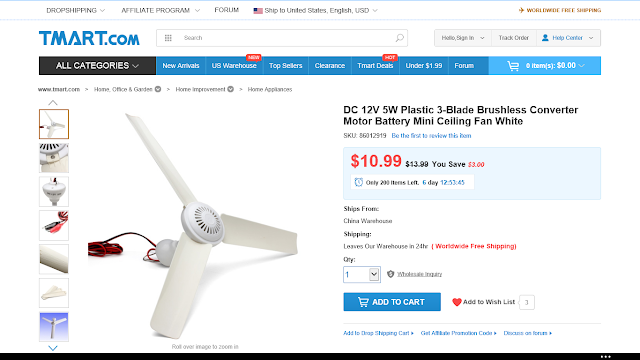 I've speculated that I could put a second fan above the aft berth without causing too much of an obstruction, but it's not really necessary.. One above the table does the job.
Like I said, I found mine on ebay, but here's the same exact one at this website: http://www.tmart.com/DC-12V-5W-Plastic-3-Blade-Brushless-Converter-Motor-Battery-Mini-Ceiling-Fan-White_p351453.html

I highly suggest you consider giving it a try yourself.. Well worth $11.00

more pics on the hard..

Standing at midpoint between boat and back river, with about an 8.5 tide putting water to my knee level.. Estimate about 300ft of marsh/ground to cross.. Most of the month the ground is dry, and always hard ground even when there is standing water. It is not what you would call a muddy marsh, you could drive a car over it when the tide doesn't cover it, that is if you could get a car over there - which you can't - the island is accessible only by water.

This picture was took as I was standing at the center point of the area I need to cross during a high tide.. 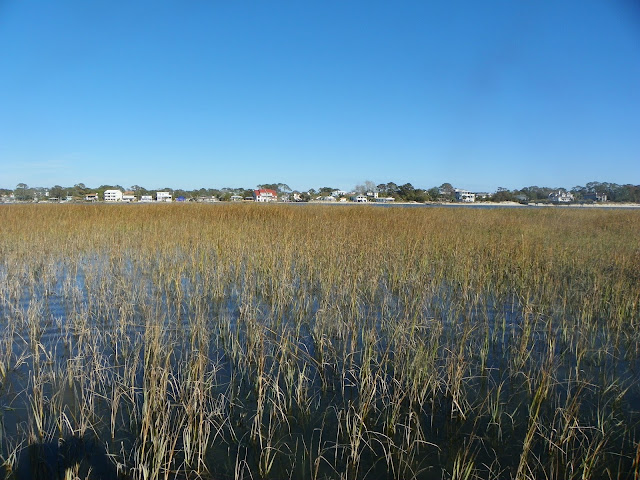 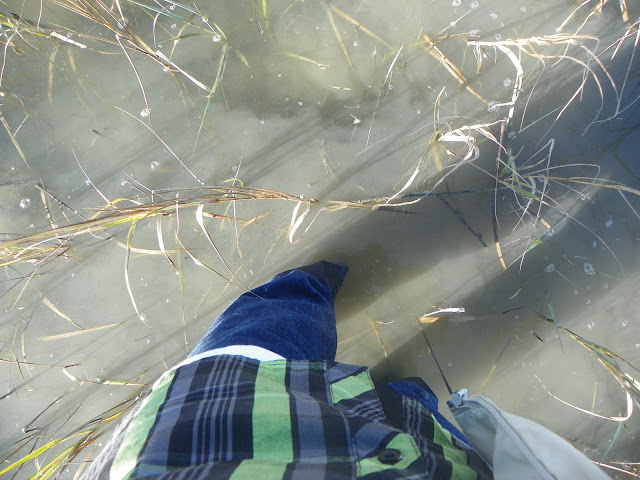 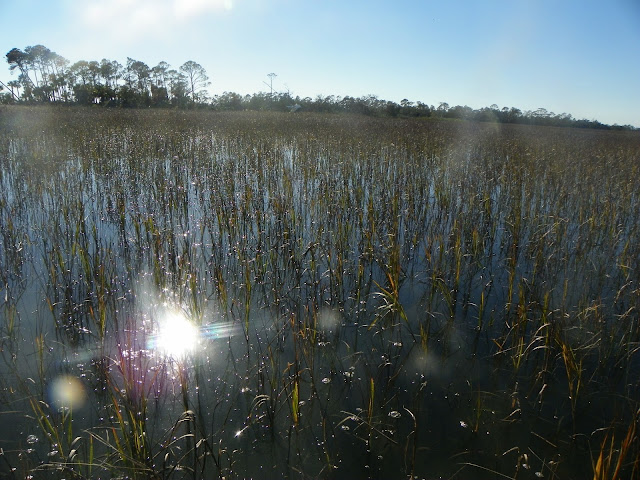 These pictures were took from the boat during a lower tide after the second unsuccessful pull. 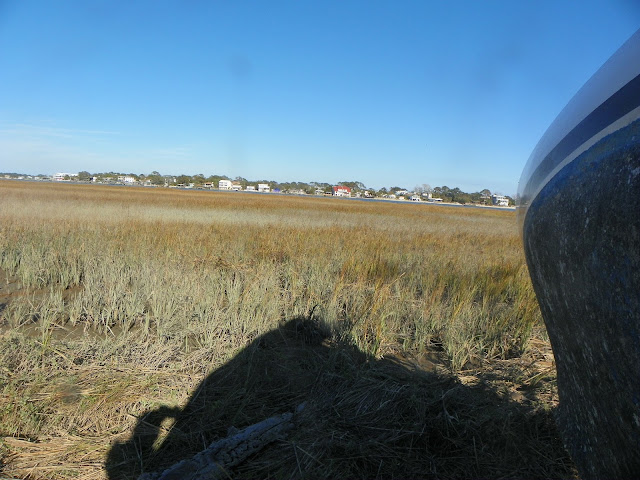 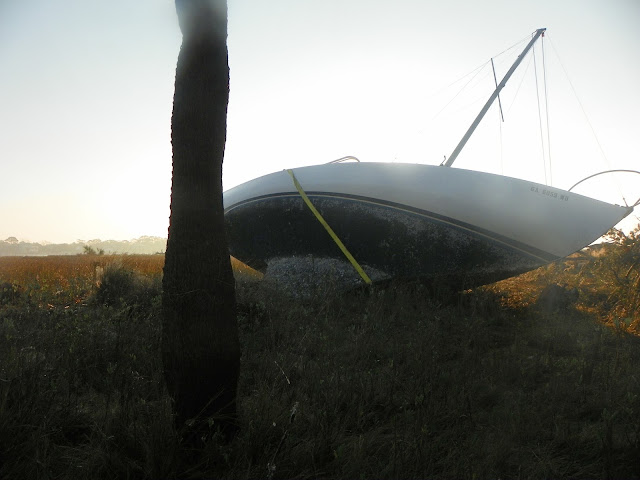 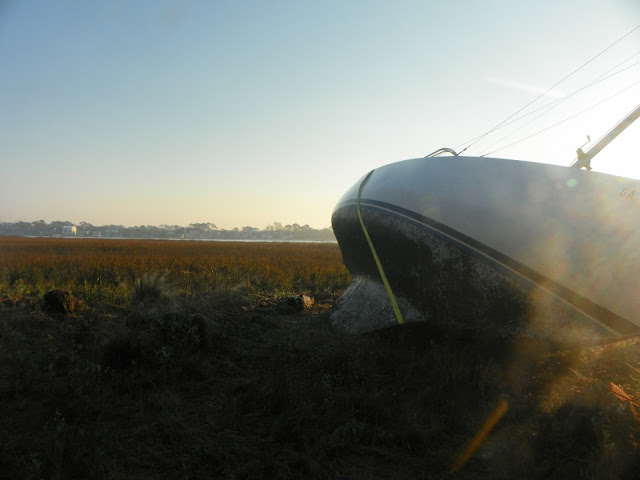 Here shows the clamp that broke when removing the rudder to avoid damaging before the pulls.. 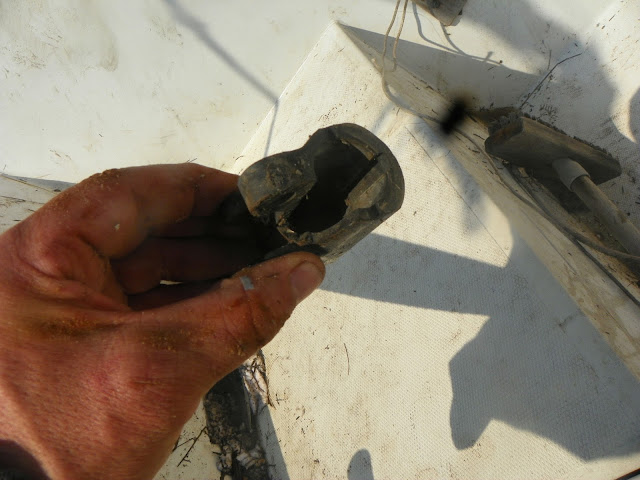 These were taken right after an unsuccessful pull during the supermoon tide last month.. 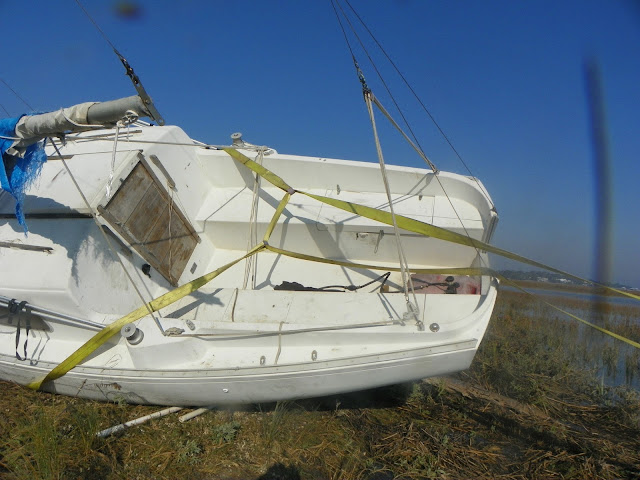 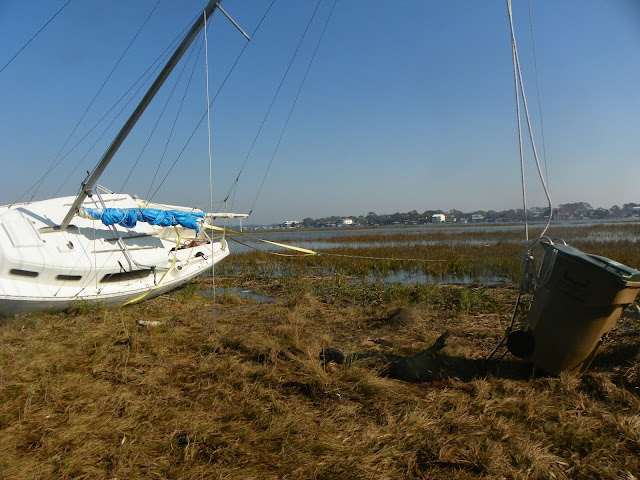 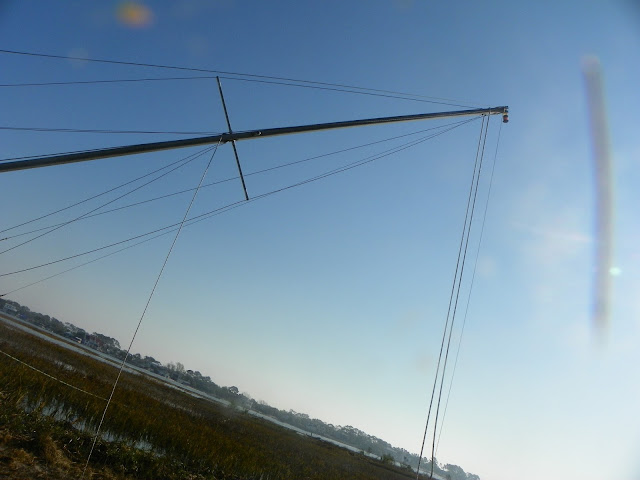 This is Edwin's boat which managed to move it 4 foot, but he was not available to try again this month.. 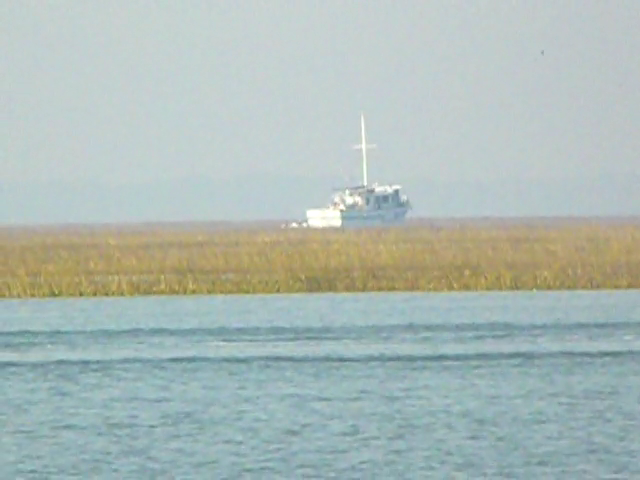 This shows where I usually enter the island just around the bend, and then walk across over to the boat.. 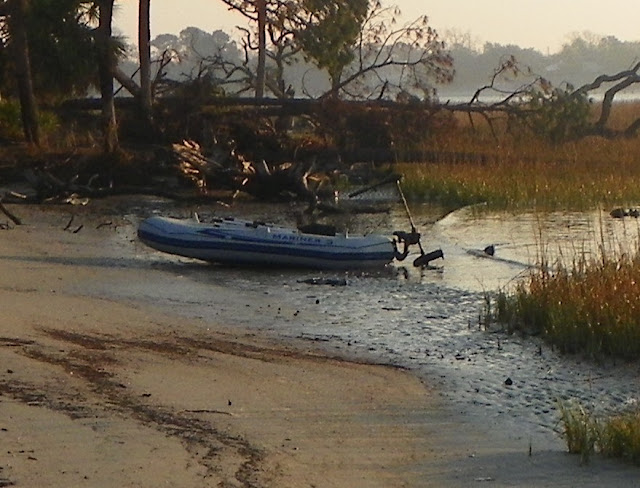 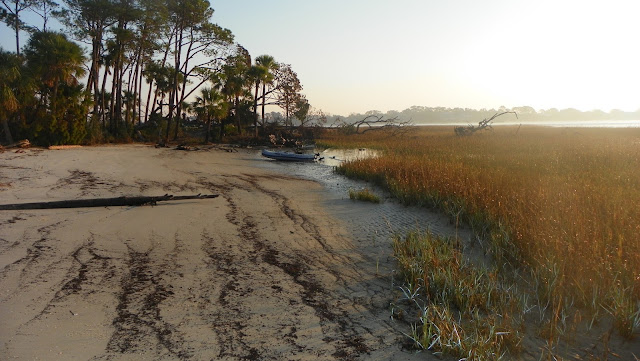 Here is a satellite view... The blue shows the tide level at about 7 foot (which is a more usual high), the green line shows the route I take on my inflatable to enter the island, and the red circle shows the general area of where my boat is stranded.. 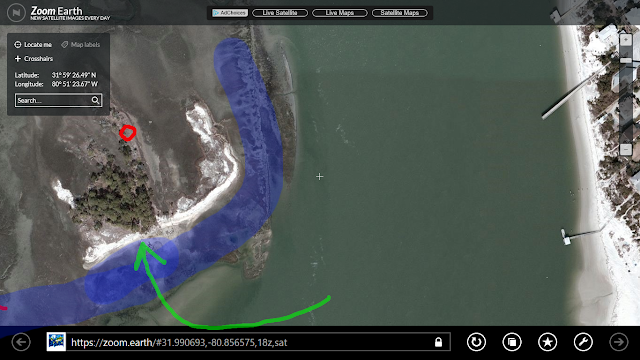 To date there has been three attempted pulls during spring tides.. The first two times involved smaller boats with 150hp engines.. it did nothing. Only the third try with Edwin's 40ft trawler made any progress, when it moved it about 4 foot before the rope broke, by the time we got everything restated, the tide was down, and we postponed until this spring tide.. but unfortunately Edwin called it off..


This Christmas is going to suck.. Last month...